When you book with an account, you will be able to track your payment status, track the confirmation and you can also rate the tour after you finished the tour.
Sign Up
738

Arrive at Istanbul Airport. After the passport control and customs continue to Domestic Flights Terminal for the domestic flight to Izmir. Izmir, the third-largest city in Turkey. Arrive in Izmir, and you will be greeted by our Romos Travel representative at the airport. Private transfer to your hotel with VIP AC vehicle. You are free the rest of the day to explore on your own.  Integrated with history, culture, and modernity, Izmir has a unique vibe that makes the city attract you to explore.

After breakfast, meet your guide at your hotel and drive north of Izmir for the excursions to Pergamum, one of the most favored “7 Churches”.  Venture to the ancient Greek city of Pergamon near the town named Bergama today. The Acropolis of Pergamon towers over the northern end of Bergama. It is divided into the upper and the middle cities with residential areas between them on slopes too steep for civic buildings. To visit the Acropolis, you take the cable car to reach the top of the hill. And you will see; Temple of Trajan, which the Roman Emperor Hadrian built in 2C AD. The steepest theater of the ancient world was constructed in 3C BC, rebuilt by Eumenes II again, and has 10,000 seats. The temple of Dionysus is located in the North of the theater.  And some others such as; bath complex, agora, the temple of Demeter, the gate of Eumenes, the house of Attalus, etc. After Pergamon, we drive to Asklepion, a Greco-Roman city where the death shall not enter. There was a healing complex and hospital built in 4C BC on behalf of Asclepius. It was one of the most important cities with its healing methods and architecture. Asklepion is also a Roman city where they built theater with 3,500 capacity. Temples and sanctuaries. The cut stone with two serpent relief has become the symbol of medicine. After the tour in Asklepion, we drive to Thyatira, founded as a Lydian town near the shrine of the Lydian sun-god Tyrimnus. Seleucid I settled Macedonian soldiers at Thyatira to form a military colony because of its strategic location. Thyatira was the fourth of the Seven Churches (Revelation 1-3). The letter to Thyatira is central and longest of the seven letters. According to Epiphanius, the city was completely Christian but aligned with the Montanist movement in 200 AD. After Thyatira, we drive back to Izmir to visit the Church of Polycarp, served as bishop of Symrna for at least forty-five and maybe sixty years. The Romans executed him at the age of 86 for his refusal to renounce his faith and sacrifice to the emperor’s genius is recorded in the Martyrdom of Polycarp.

After the Pergamon, Asklepion, and Symrna sightseeing tour, drive back to the hotel. Overnight in Izmir.

After check-out and breakfast, we drive to Sardis, was the capital city of the Lydian civilization. The legendary king Croesus came from the Pactolus River’s gold (560-546 BC). Sardis was known as a textile center, producing wool to make the “himation,” the most common outer garment for men and women in ancient times. Alexander the Great captured the city from Persian rule in 334 BC then Sardis served as the capital city of the Seleucid Empire until 190 BC. Under Roman rule, the population about 100,000 residents. Plutarch’s “How to Rule a City” was written to residents of Sardis. The city was the fifth of the Seven Churches addressed by John in Revelation 1-3. Melito was the bishop of Sardis. Today, you can see Sardis’ unearthed elements such as; Lydian House, the temple of Artemis, Byzantine Church, theater, Marble Court, bath and gymnasium complex, synagogue. After lunch, we drive to Philadelphia, founded by the Pergamene king Attalus II (159-138 BC), the newest of the Seven Churches’ cities. When the Romans attempted to turn Attalus against his brother Eumenes II, he remained loyal, thereby earning the nickname “Philadelphus” (Polybus 30:1-3; 31.1; 32.1). Philadelphia was the sixth of the Seven Churches mentioned in Revelation 1-3. Ammonia and Quadratus were Christian prophets who ministered in Philadelphia during the reign of Hadrian. After the tour, we drive to Denizli to stay overnight in Pamukkale.

After the Sardis and Philadelphia sightseeing tour, drive back to the hotel. Overnight in Pamukkale.

After check-out and breakfast, we drive to Hierapolis ancient city. We are going to see the largest Necropolis of ancient times. The cemetery dates between 2C BC- 3C AD and has 1200 tombs. 300 epitaphs have been read and published. Roman Bath dates 2C AD, and the structure was converted into a church in 6C AD. The olive press is used for processing olive oil. Frontinus Street, with its Doric style façade extending 170 m to the Byzantine Gate, dates back to late 4C AD when the city grew; they needed a defensive Wall around it. The Great Cathedral dated 6C AD when the city was promoted to the metropolis Phyrigia. The cathedral has a narthex, three aisles, and an apse. Plutonium, newly discovered as the shrine of Pluto. Agora was built in 2C AD. It was one of the largest market places in the ancient world. In the Martyrium of Philip, the Ephesian bishop Polycrates said that you could still see the tomb of apostle Philip and his two daughters in Hierapolis. The theater is one of the best well-preserved theatres of the ancient World and had 12,000 persons. The Antique Pool, also known as Cleopatra’ Pool, can swim among the ancient ruins in the water. After the archeological sightseeing, you ha have free time of about 1 hour, then proceed to the Travertines where you can enjoy walking on the white terraces. The water has been coming underground and flowing down to the slopes for centuries. We are having lunch at a local restaurant then drive to Laodicea ( city of Zeus), entering from Syrian Street, which has been unearthed in recent years. The Agora was standing nearby the entrance. The Greeks built the theater with a 12,000 person capacity. The basilica, built-in in 6C AD. Corinthian Temple, which has Roman-style columns. The remains of Ephesus’s gate, which was dedicated to the Roman Emperor Domitian at the end of 1C AD. The stadium, built by the Romans and one of the biggest stadiums with an arena in Anatolia.

After the Pamukkale and Laodicea Tour sightseeing tour, drive to Kusadasi.

After breakfast, we start to Ephesus Tour. Our Professional tour guide will be introducing the ancient sites of Ephesus. We will drive to Virgin Mary’s House, upon the dream of German nun Anna Katherina Emerich, the Lazarist priests followed the descriptions and the signs then discovered the house 1891 CE. According to Catholic belief, Mary was taken here by St. John, and she spent the rest of her earthly life there.  After the Virgin Mary’s House, we proceed to Ephesus Ancient City, the capital city of Asia Minor during the Roman era. According to myth, Ephesus was founded by Greek commander Androculos around 1,000 BCE. Moreover, Alexander the Great, Lysimachus, Coressus, Antiochus II either invaded or ruled in this city. While the excavations are still going on, you will see the ancient remains such as State Agora (a marketplace and meeting point), Odeon (Bouleuterion) concert house and council, Town Hall and Artemis Sanctuary, Domitian Square, a complex consisting of temple fountain and a bath, Curetes Street colonnaded and monumental Street in Ephesus, The Hadrian Temple dedicated to Emperor Hadrian dating to 200 BCE, Latrines the public toilets, Celsus Library proves us that how Ephesians were intellectual and dates back to 200 BCE with the library having had 12,000 scrolls, Forum a commercial center located by the port and finally The Great Theater the largest ancient theater with 25,000 capacity. After Ephesus ancient city, we drive to lunch, and we are visiting St. John Basilica; Emperor Justinian (527-565) built the basilica of St John on the site of the saint’s fourth-century church and tomb. With a cruciform plan and six domes extending 110m. long, it was his grandest creation outside Constantinople. It conforms to a splendid architectural type first developed under Constantine I in the church of the Holy Apostles in Constantinople. Visit the Temple of Artemis, which was one of the seven ancient wonders of the World.

After the Ephesus sightseeing tour, drive back to the hotel.

After breakfast, we drive to Izmir Airport, flight to Cappadocia. After landing at Cappadocia (Kayseri) Airport, transfer to hotel and check-in, time in leisure. The rest of the day is yours—overnight in Cappadocia.

Note: Breakfast and Dinner at the hotel.

After breakfast, we start to Cappadocia Day Tour. You are visiting the highlights of Cappadocia.

Goreme Open-air Museum dates back to the 2nd century, where the ascetic monks who adopted seclusion lived. They had their own independent churches and monasteries where they created a community. Today, the museum houses St. Basil’s Church, Elmalı Church, Boys and Girls, St. Barbara Church, Serpent Church, etc.…

Fairy Chimneys: What makes Cappadocia so popular are those rock formations, called “ fairy chimneys” by the people. Those different rock formations result from millions of years of natural events, such as; rain, wind, erosion. The fairy chimneys had been dwellings, churches, shelters, and natural fortresses for many years. Although the locals live in the town today, the fairy chimneys can be visited by travelers/tourists.

Red Valley; is a hiking trail and famous for its red-rose color. The valley is located in the middle of Goreme town where they appreciate with sun-rise and sun-set. The Red Valley houses some abandoned churches, Uzumlu Church, Hacli Church, and Direkli Church, with murals and frescoes.

Cavusin Village: located on the way to Avanos. The rarest residents were still some people follow the ancient attitudes by using the old stuff. You can see those villagers farming, making potteries, and carving. Cavusin Village houses two churches; one dedicated to St. John the Baptist and the other Nicephorus Phocas. Until the 1920’s the Turks and The Greeks were living there together. After the exchange population, The Greeks left the village.

Pigeon Valley: one of the panoramic spots of Cappadocia, which is located between Uchisar and Goreme. Since ancient times, there has been feeding the pigeons resulting in the carved soft tuff on the slopes to make dovecotes. You can also see Uchisar Castle from a different perspective and may feed the pigeons around you.

After the Cappadocia sightseeing tour, we drive back to the hotel. Overnight in Cappadocia.

Breakfast at hotel, Pick up from the hotel, and transfer to Cappadocia (Kayseri) Airport for the flight back to Istanbul for your International flight.

After completing the amazing Turkey Biblical and Churches Tour, Romos Travel wishes all guests a very healthy and wonderful life ahead… 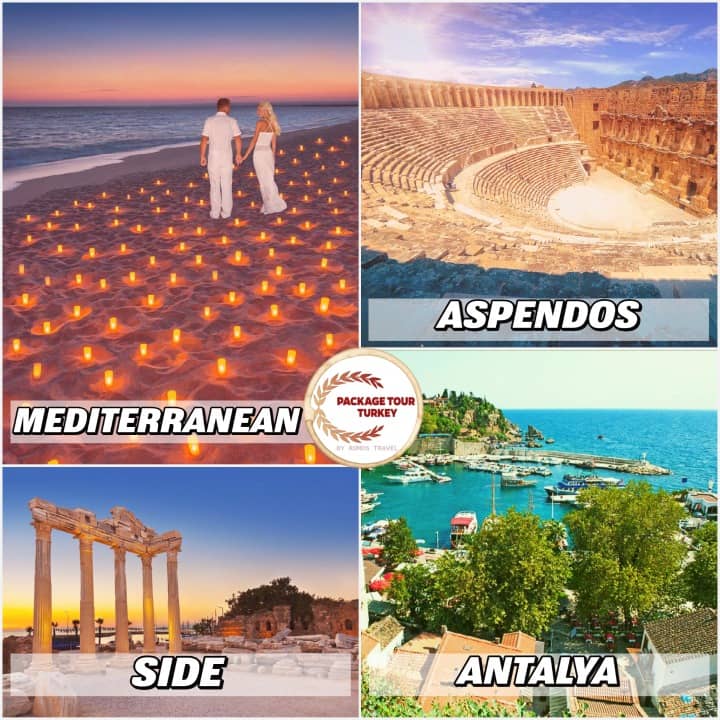 5 Days Honeymoon Tour at the Aegean Sea and its beautiful city Bodrum
0
From$1,056

Explore the most beautiful destinations of Turkey; Istanbul, Antalya & Pamukkale
0
From$2,149 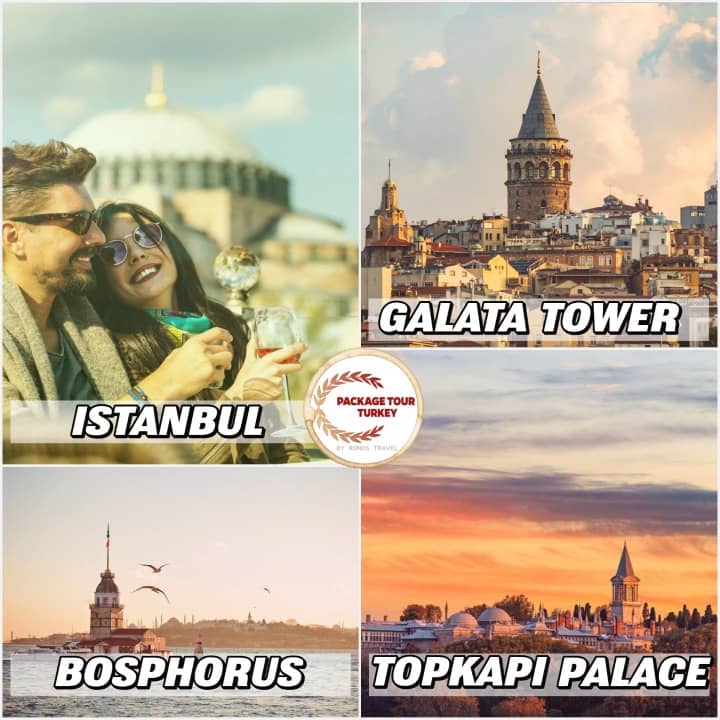 Istanbul Honeymoon Tour with its highlights & Spend 5 Days in the dream city.
0
From$620 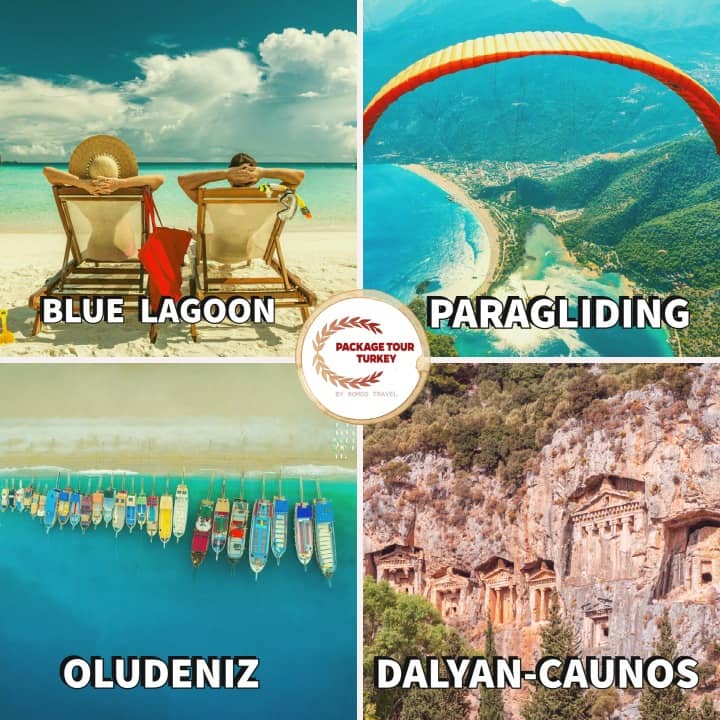 Catch the winter time in Turkey and feel the romanticism in Istanbul & Bursa
0
From$1,170

The dream and magical destinations of Turkey; Istanbul, Cappadocia & Ephesus
0
From$1,924

Discover Antalya & Istanbul Tours
0
From$1,052
Open chat
You're Welcome 👋
Please feel free to contact us for further information that you may need?